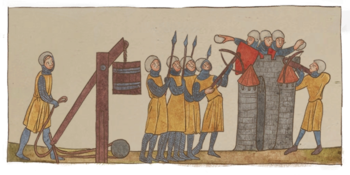 Weapons are a type of item in Kingdom Come: Deliverance. They are used in combat to defeat enemies.

Weapons made of wood, stone, bone and antler served mankind since prehistoric times. Initially, given the materials, the weapons of choice were pointed, for stabbing – spears, knives, arrows etc. Later, with developments in metalworking, bladed weapons began to emerge: daggers, axes and swords. In addition to these two traditional types, we also distinguish blunt weapons, thrown weapons, hand firearms, artillery and booby traps. In the Middle Ages there were also plenty of lances, halberds and crossbows. Rural weaponry was often derived from farming tools. From the 14th century, Europe began deploying cannon, using gunpowder (long known in China) and firearms in general began to make slow inroads. Surviving records of the use of small arms in the Czech lands date back to the reign of Wenceslas IV – they were used in 1398 during the siege of the Archbishop’s mansion in Kyje near Prague.